It’s been two years since Bruno Mars was into Uptown Funk, now he’s back with another hit song in 24K Magic! Still, the question remains..

Could this new single surpass, or even just come close to that 2014 musical success?

But hey, somethin’ seems to be missin’ here.

The lyrics? Nahh. In dance hits, lyrics hardly matter — unless there’s somethin’ sooo not good. The dance scenes? Right. It’s quite lacking. Guess, they emphasized ‘luxury’ a little more, yeah, because of the title. In Uptown Funk, there were a lot of ’em dance scenes with ’em cool steps! As they say, ‘ala Michael Jackson’.. And so, the hit!

Anyway, we like the private jet though — and those fountains. The cap? Good. 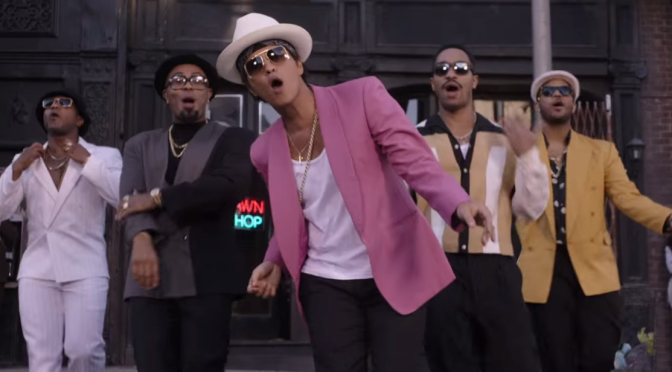 When was the last time you heard music of the funk genre based on the 70s and 80s? Well, that’s exactly what Mark Ronson will give us with his hit song, Uptown Funk..

Oh, by the way, the song also features Bruno Mars who did a good job in collaborating with Mark. In fact, Bruno even looked like the centerpiece of the video with that cool pinkish jacket, shades and hat. It’s great dancing – spiced up with one of many men’s favorite past time – girl watching!

No wonder its funky beat is on the rise as it climbed from number 8 to 5 in this week’s Billboard Top 100 Songs. As for YouTube, more than the near 30 million views, clearly, viewers were really into it what with all their tales.

So, stand up and get those feet movin’!